The Project site is located in an industrial area of the City of Glendale at 800 Air Way, Glendale, CA 91201, just northeast of the Interstate 5 and Highway 134 interchange.  The site is bounded to the south by the Verdugo Wash and Highway 134, to the west by the Los Angeles River and Interstate 5, to the north by commercial properties and to the east by commercial and residential properties. The site is currently used as the Grayson Power Plant. The Grayson Repowering Project would be located entirely within the existing Grayson Power Plant, an operating power plant.

The Grayson Power Plant, named after the City's first Chief Engineer and General Manager Loren Grayson, has been faithfully serving the electrical power needs of the City of Glendale since 1941. Prior to 1937, the City purchased all of its electrical power from the Pacific Light and Power Company (today known as Southern California Edison). That same year after evaluating the current and future electrical needs of the Glendale community, the City not only entered into an agreement to purchase hydroelectric power from the Hoover Dam Project but also made a decision to establish a City owned and operated steam powered electrical generating facility. Construction of the new facility began in 1939 and the first generating unit went into service in 1941. Since that time the facility has been expanded to meet the growing needs of the residents and businesses in the City and has proven to be an invaluable asset to both GWP and more importantly to their customers. However, over time due to age and normal degradation of the equipment, the reliability, efficiency and cost effectiveness of the facility has steadily and continuously declined. Recognizing the tremendous benefit that locally generated power has provided our City and seeing the long term benefits that would be derived from replacing the existing units not only from an efficiency and cost perspective but also an environmental quality standpoint, the City has embarked on a process for the potential replacement/repowering of the existing facility. 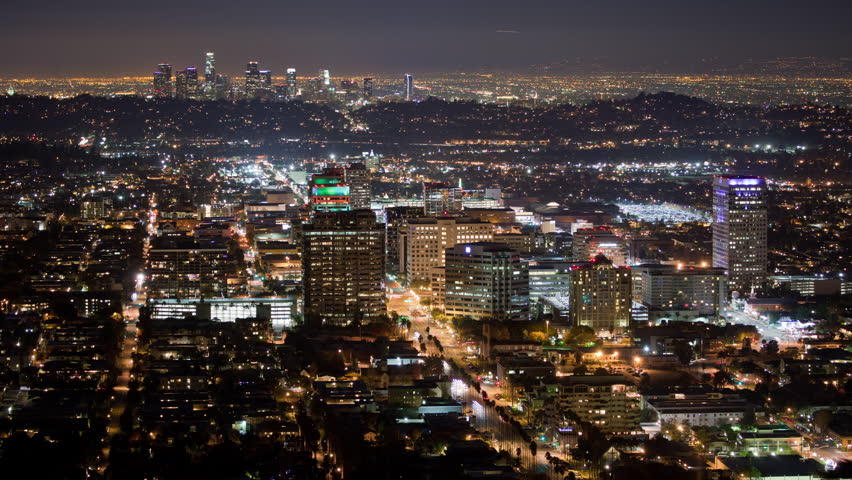 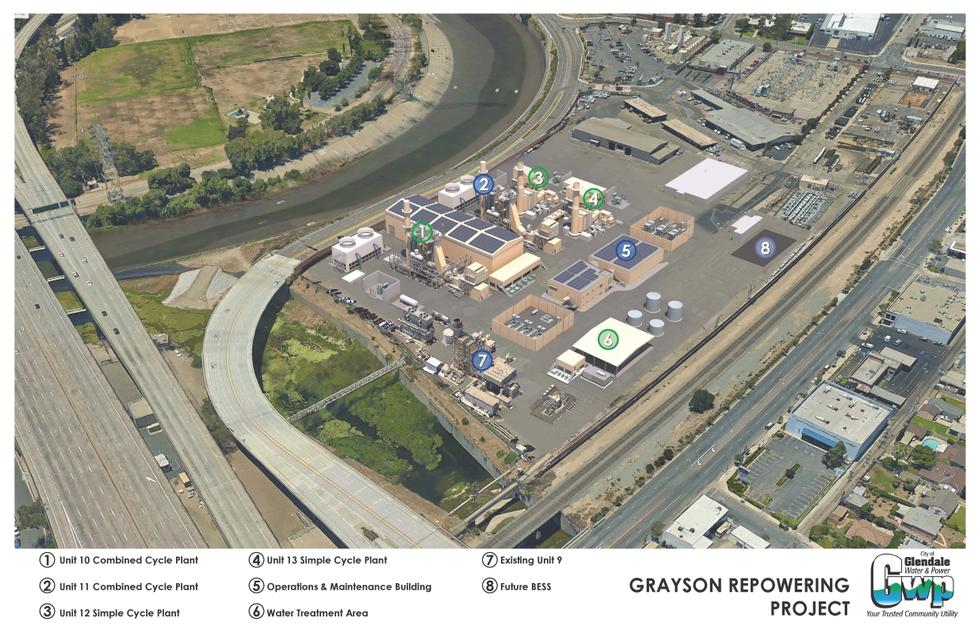 The primary objective of the Project is to replace the aged, inefficient, inflexible, and unreliable generation units at Grayson Power Plant with approximately 260 megawatt (MW) net modern power generation that is efficient, reliable, operationally flexible, and that can easily integrate into the City of Glendale’s power system. This Project would ensure system reliability, balance renewable imports, and meet the power needs of the City in the event that the importing capacity from external transmission lines is not available to serve its load.

The City of Glendale, Department of Water and Power (City) is proposing to repower the Grayson Power Plant (Project), located in an industrial area of the City of Glendale at 800 Air Way, Glendale, California 91201, just northeast of the Interstate 5 and Highway 134 interchange.  A majority of the facilities located at the Grayson Power Plant, with the exception of Unit 9 (a simple cycle peaking plant built in 2003), were completed between 1941 and 1977, and are proposed to be replaced with more reliable, efficient, flexible, and cleaner units and related facilities and infrastructure.  The City is proposing to replace all the existing generation facilities, units, and their related infrastructure, with the exception of Unit 9, by removing existing aboveground and belowground equipment, and facilities and building new generation facilities.  This includes demolishing the Grayson Power Plant Boiler Building, replacing Cooling Towers 1 through 5, and replacing the generation units, designated as Unit 8A and 8B/C. The existing generation facilities (with the exception of Unit 9) would be replaced with a combination of combined cycle and simple cycle gas turbine generation units.

The Project would be located entirely within the existing Grayson Power Plant, an operating power plant. The site is bounded to the south by the Verdugo Wash and Highway 134, to the west by the Los Angeles River and Interstate 5, to the north by commercial properties, and to the east by commercial and residential properties. The approximate coordinates of the Project are 34° 09’ 19” N and 118° 16’ 42” W.

On July 23, 2019, at a regularly scheduled meeting, the Glendale City Council unanimously approved the 2019 Integrated Resource Plan and adopted the motions and resolutions that will allow the City to commence preliminary design, environmental reviews, permitting, detailed financial analysis, and contract negotiations for the preferred clean energy portfolio.

The Integrated Resource plan will provide a diverse, clean energy portfolio of generation, transmission, and distributed generation assets. The portfolio will allow GWP to provide its customers with reliable, affordable, and environmentally sustainable power and will enable GWP to transition to a 100% clean energy future. The proposed portfolio includes:

The proposed programs include:

In addition, the City Council directed staff to continue to seek additional resources while proceeding with this plan in order to further reduce Glendale’s carbon footprint.

The proposed repowering of the Grayson Power Plant is necessary to meet current and future City energy needs and California Renewables Portfolio Standard (RPS) requirements. Pursuant with Senate Bill 350 that was signed into legislation in October 2015, the RPS requires retail sellers and publicly owned utilities including GWP to procure 50 percent of their electricity from eligible renewable energy resources by 2030. The City serves its power system load through a combination of renewable energy sources (both local and imports), non-renewable imports, and local generation.  The City system’s single largest contingency is nominally 100 megawatts (MW) based on imported power through the maximum City allocation on the 500 kilovolt (kV) Pacific Direct Current (DC) Intertie (Path 65).

In order to meet retail power load obligations, Glendale Water and Power (GWP) relies on a combination of both local and remote generation, as well as long-term power purchase agreements and spot market purchases from a variety of suppliers throughout the Western Electricity Coordination Council (WECC) territory, including the California Independent System Operator (CAISO).  Natural gas for generation is supplied by several sources, which include gas reserves in Wyoming, a pre-paid gas commodity contract, and the daily gas market. GWP also uses transmission and generation rights to take advantage of arbitrage opportunities and to transact with counterparties in the wholesale market. As a result of recent state mandates, GWP is becoming more involved in short and long-term markets for renewable energy and carbon allowances.  GWP operates within the Balancing Area of the Los Angeles Department of Water and Power.

In 1994, the City of Glendale developed a gas-to-energy project at Scholl Canyon landfill.  The project captured the naturally-occurring raw landfill gas (LFG) that results primarily from the decomposition of organic waste deposited in the landfill.  The LFG, by state and local regulatory mandate, must be controlled in such a manner as to eliminate the venting to the environment of this volatile heat trapping gas that has high methane content.  This gas is often referred to as a greenhouse gas or GHG.  The accepted control method is the combustion of the raw LFG in a flare, in an engine, or in a turbine, all of which dramatically reduce the overall toxicity and global warming impacts of methane.

Prior to 1994, the LFG at Scholl Canyon was combusted exclusively in the permitted flares operating at the landfill, which are managed by the Sanitation Districts of Los Angeles County under a Joint Powers Authority agreement with the City of Glendale.  When the gas-to-energy project was developed, the LFG was transmitted via a 5.5 mile pipeline to the Grayson Power Plant where it was blended with natural gas and used as fuel in three older, converted boilers (Units 3, 4 & 5) to generate electricity.  The flares have remained in place and are permitted and operable and act as a secondary point of delivery/control for the gas.  Over the years, the flares have been used, albeit less frequently than before, during maintenance periods, emergency shutdowns, and equipment failures at Grayson.  During the past three years, these types of occurrences have been more frequent as Unit 3 was taken out of service due to age and there have been several major repair projects on Units 4 & 5.

In the course of compiling the Environmental Impact Report for the proposed Grayson Repowering Project, one particular study area that was included was an evaluation of air quality.  The City assessed the emissions from the proposed Grayson facility as well as from the existing facility for a comparison.  The results indicated that the emissions from the existing, older and mechanically-degraded Grayson generating units presented a higher than acceptable health risk.  The results are included in the EIR on page 9.96 (Table 9-7) and were presented in City Council meetings on February 6 and April 10, 2018.  The City promptly notified the South Coast Air Quality Management District (SCAQMD) of the findings and based on the findings, the City proactively implemented a risk reduction measure and transferred the combustion of the LFG to the secondary location at the landfill flare station.  The City continues to work with SCAQMD on the future handling and control of the LFG.

Request for Qualifications for EPC

The following are the EPC proposers that were selected to receive the Request For Proposals for the Proposed Grayson Repowering Project:

The EPC RFP is scheduled to be released in August, 2017.

Click here to view the whole Draft Environmental Impact Report (DEIR) for the Grayson Repowering Project. The DEIR is also broken down by sections below.

Click here to view FAQs for the Grayson Repowering DEIR.

Click here to view the Power Point from GWP's Special Commission Meeting on the DEIR.

APPENDIX A INITIAL STUDY AND NOTICE OF PREPARATION

APPENDIX B WILL SERVE LETTERS

How energy storage is starting to rewire the electricity industry

Why Australia's blackouts are a problem for us all

See the links below for Final Environmental Impact Report (EIR)

You may also view the Final EIR in person at the following locations:

The Glendale City Council will meet to discuss the Final EIR on April 10, 2018

COVER, TABLE OF CONTENTS, AND GLOSSARY

APPENDIX A INITIAL STUDY AND NOTICE OF PREPARATION

APPENDIX B WILL SERVE LETTERS

REQUEST FOR PROPOSAL (RFP) FOR LOCAL AND REGIONAL RENEWABLE, LOW-CARBON, AND ZERO CARBON ENERGY AND CAPACITY RESOURCE OPTIONS TO SERVE THE CITY OF GLENDALE

Send Us A Message

Great for large exposure in sidebars.

Great for moderate exposure in sidebars.